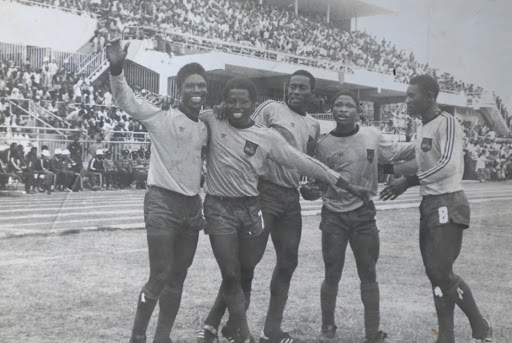 In their maiden appearance, Ghana hosted the fourth edition of the Africa Cup of Nations in 1963.

They opened their Group A campaign with a 1-1 draw against Tunisia, before beating Ethiopia 2-0 to go top of the group and reach the final.

Ghana retained their title in Tunisia 1965 to add a second AFCON trophy to their name.

The holders opened their Group B campaign with a 5-2 win over DR Congo (then Congo Leopoldville), before beating Cote d’Ivoire 4-1 to top the group with maximum points and secure their place in the final match.

Against hosts Tunisia in the final, Frank Odoi and Osei Kofi scored in regular time as the 90 minutes ended in a 2-2 draw forcing an extra time. Odoi scored the winner as the Black Stars claimed their second title.

Ghana hosted the Africa Cup of Nations for the second time in 1978, and once again they emerged victorious adding their third title, on home soil.

They opened their Group A account with a 2-1 victory over Zambia, before being held to a 1-1 draw with Nigeria.

The Black Stars defeated Burkina Faso (then Upper Volta) 3-0 to top the group and reach the semifinals.

Karim Abdul Razak scored the lone goal as Ghana defeated Tunisia to reach the final, where they locked horns with Uganda. Opoku Afriyie scored in each half as the hosts won 2-0 to add their third AFCON title.

The Black Stars were the first African side to win four AFCON titles when they won the continent’s showpiece in Libya 1982.

They held the hosts to a 2-2 draw in the opening match, before settling for a barren stalemate with Cameroon. A 1-0 victory over Tunisia saw Ghana reaching the semifinals where they faced Algeria.

After a 2-2 draw in regular time, George Alhassan scored in extra-time to hand Ghana a 3-2 victory and a place in the final. Alhassan was once again on target against hosts Libya, as the final ended 1-1 in normal time.

The West Africans emerged victorious 7-6 on penalties to add their fourth title; their third under legendary coach Charles Kumi Gyamfi, who set a record of being the most decorated coach in AFCON history (a feat since replicated by Egyptian Hassan Shehata).