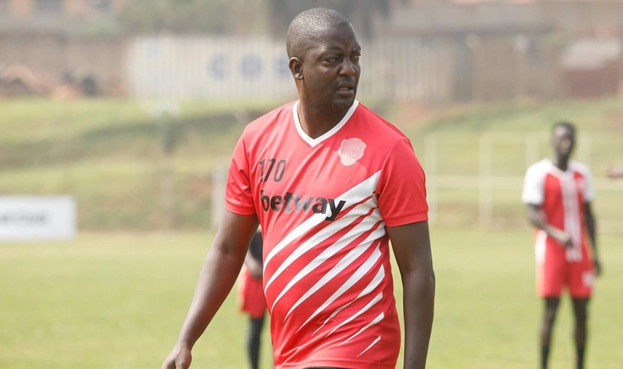 Wasswa Bbosa has been sacked as Express FC head coach days after a disappointing 2-2 draw against bottom side Tooro United left them 10 points behind title rivals and current leaders Vipers SC.

Express has confirmed that Bbosa’s assistant James Odoch will be placed in temporary charge with the club also revealing their intention to appoint a permanent replacement at the end of the season.

Bbosa signed a one-year contract extension in August, but leaves after overseeing only three vicotries in the last 10 games a run which has effectively ended their title hopes.

While the results may not have been necessarily disappointing to warrant a sack, Bbosa leaves after shattering relationships with many officials at the club.

Bbosa’s position was discussed by Express officials on Sunday, following a reported heated brawl with several officials after the game against Tooro, before the announcement of is dismissal was made on Monday.

A statement from Express said: “Express FC would like to confirm that Wasswa Bbosa is leaving his role as head coach with immediate effect.”

“The club would like to thank Wasswa Bbosa for his dedication and memories, most notable of those include winning the StarTimes Uganda Premier League (2020/2021) for the first time in 12 years and the CECAFA Kagame Cup, the first ever in the club’s history.”

“Express FC wish Wasswa Bbosa the best of luck in his future engagements.”

The has been an apparent rift between Bbosa and his superiors at the club, with the coach openly expressing animosity and anger towards the club’s Chief Executive Isaac Mwesigwa.

In Express’ opening game of the season which they lost 2-0 to Arua Hill, Bbosa openly accused Mwesigwa of working to sabotage and frustrate him, saying that he ‘paid people to make sure that Express lose games’.

It is a statement that also saw him receive disciplinary sanction, with the coach receiving a three-game suspension to go with a fine of UGX two million.

Bbosa’s comments alienated Mwesigwa who has rarely been seen at Express games while he has also played a reserved role in several matters relating to the first team.

The fall outs have not stopped with Mwesigwa alone, reports claim that Bbosa also fell out with goalkeeping coach Daniel Kiwanuka as well other some other members of his backroom staff.

Getting married to A Norway Woman Essentials Explained