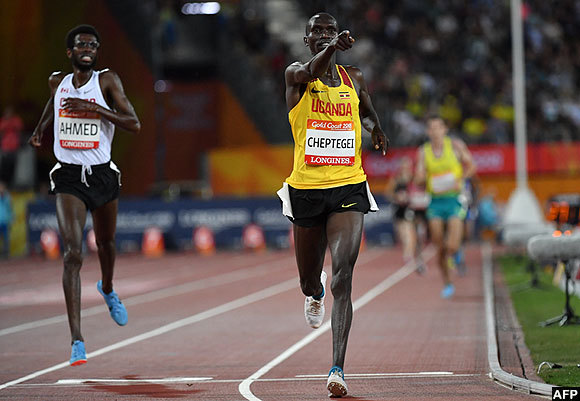 State minister for sports Hon. Hamson Obua has revealed a trinity of ‘purpose, pride, and excitement in prospect for Team Uganda during a breakfast meeting to launch the journey at Sheraton Hotel in Kampala.

After a haul of six medals including three golds at the last edition of the commonwealth games held in Gold Coast Australia in 2018, Uganda will be hoping for more when the 22nd edition of the games get underway on July 28 in Birmingham.

The challenge of matching such lofty heights is immense, but Team Uganda will draw confidence from sending the largest-ever delegation for the games.

And Obua, who will lead the delegation to the United Kingdom is optimistic that the athletes will once again outdo themselves.

“We are optimistic about what we can achieve as a nation at the Commonwealth games,” Obua told Sanyuka TV.

“I am sure it is going to be very exciting for both the athletes and every Ugandan will be proud of this group because we do have several young and hungry athletes who will deliver success.”

“They have done their bit by qualifying, and now it is time for the government to give them that extra push by making sure they have the best preparations.”

“With the best preparations we are sure to improve on the performance from Gold Coast games in 2018,” he added.

At least 80 athletes from 13 disciplines like athletics, rugby, boxing, netball, and swimming among others have already secured slots in Birmingham.

World champion Halima Nakaayi who is yet to add a commonwealth medal to her collection is upbeat about the competition having bagged bronze from the indoor championships in Belgrade in March.

“I want to win a medal at the Commonwealth,” Nakaayi declared adding; “That is the objective, that is my aim.”

“I have had several good races so far, and my body has been responding very well after every race so I feel that by the time the games start I will be in even better shape.”

Meanwhile, para-swimmer Husna Kukundakwe who will make her debut at the games hopes to take big lessons from the competition.

“I had a very good experience at the Paralympics. I took in so many great lessons.” Kukundakwe disclosed.

Now with the Commonwealth games here, it is another chance to learn and grow because the event that was confirmed (100m freestyle) is not my best,” she added.

Uganda has collected 53 medals since her first appearance at the commonwealth games in 1954 in Vancouver.

16 of those have been gold medals, 16 silver medals, and 21 bronze medals.

The late Patrick Etolu collected the country’s first-ever medal at the games, winning silver in high jump with a jump of 1.99 m.

Long-distance runner Moses Kipsiro has collected the highest number of gold medals for Uganda winning two gold medals in the 5000 and 10,000 m races in Delhi in 2010 and another 10,000m gold in Glasgow in 2014.

How Mail Purchase Brides Can Help You Find a Partner