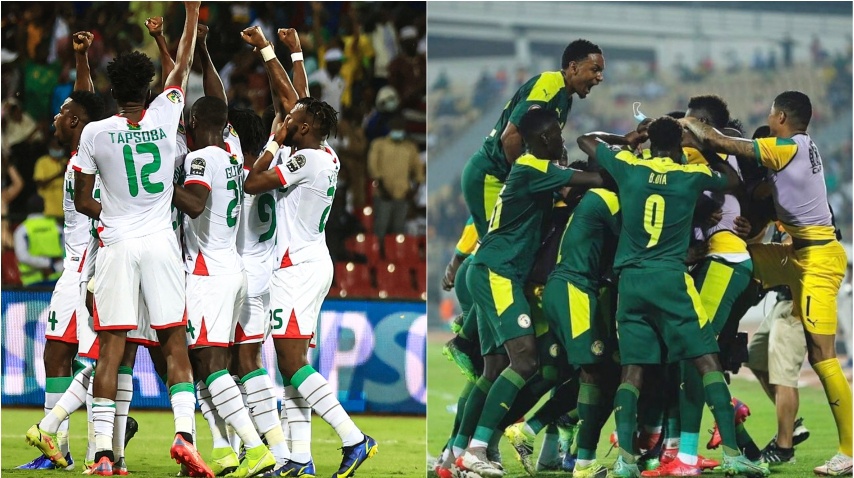 Dreaming of their first ever TotalEnergies Africa Cup of Nations title, The Stallions and Teranga Lions will search for a place in the 6 February much awaited Grand Final.

The Stallions of Burkina Faso have impressed since the start of the competition with a fluid, offensive and forward-looking game.

The Burkinabe finished third in their last appearance in Gabon 2017. After missing the last edition in Egypt, they are now eyeing to better their best AFCON record when they finished as losing finalists in 2013.

“The match against Senegal will be like a final. We will play all our assets to go to the final and seek the crown,” said goalkeeper Hervé Koffi, one of the team’s best performers in Cameroon so far.

“Personally, I achieved my goal, but as a competitor I aim to win the trophy next Sunday. We are determined to go all the way to win the title.”

“Against Senegal, a great footballing country, we have to be ourselves. The main thing is to play our usual game.”

“The most important thing for us is to go as far as possible in the competition. I’m satisfied with my teammates, and I can promise you that we’re going to do our best to get the title.”

“We are expecting a great match this Wednesday against Senegal with positive pressure.”

Coach Aliou Cissé and his side reached the AFCON semifinals for the second time in a row. Finishing as runners-up in Egypt 2019, Senegal are eyeing a title that eluded them for a long time.

The Teranga Lions timidly started the competition in Cameroon but have been fueling better and better since the Round of 16.

“We have recovered our players little by little, we are right in it,” says the Senegalese coach, a former Paris Saint Germain player.

Sadio Mane’s teammates are dreaming of a place in the final, and nothing but the title they narrowly missed twice, finishing as losing finalists in 2002 and 2019.

“We prepared well for our semi-final against Burkina Faso, even if we didn’t have a lot of time. We focused on recovery.”

“We know Burkina Faso team well; they remain a good team that is progressing with good players. We are expecting a difficult match, but we are ready.”

I am thinking of doing everything to pass this milestone of the semi-finals. We hope and work to win this African title. We have never doubted our abilities. Our desire is to play the grand final on February 6th”.

“We are focused for the semi-final against a good Burkina Faso team which remains one of the best in the competition.”

“We will play with positive pressure and a desire to represent the Senegalese flag and the country well. We want to continue the adventure and win the title.”

·       This will be the third Africa Cup of Nations encounter between Burkina Faso and Senegal and the first in the knock-out rounds, with Senegal unbeaten in the previous two matches in the group stages (W1 D1).

·       Burkina Faso will play in their fourth semi-final match at the Africa Cup of Nations, having been eliminated in two of their previous three – last progressing to the final in 2013 (3-2 on penalties against Ghana).

·       Senegal have won five of their last six knock-out matches at the Africa Cup of Nations, keeping four clean sheets and conceding just twice – with their only defeat the 2019 final, against Algeria (1-0).

·       Senegal could reach the final of the Africa Cup of Nations for the third time – no team have played in more finals (2) without ever winning, while the Lions of Teranga could become the first side to play in consecutive finals since Egypt in 2010.