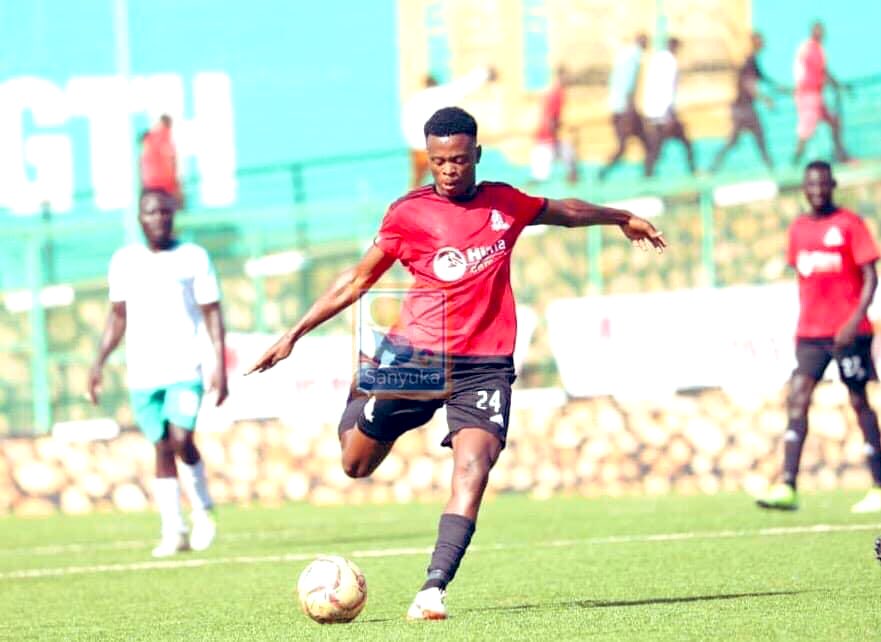 Bobosi Byaruhanga and Fauzia Najjemba have been crowned winners of the 2021 Airtel-FUFA Awards during a glittering ceremony at Speke Resort in Munyonyo.

Byaruhanga won the award after a breakout year with Vipers SC, the Uganda U20 Hippos and the Uganda Cranes beating Express FC forward Eric Kambale and teammate Aziz Kayondo.

Kambale finished as the second top scorer in the StarTimes Uganda Premier League with 15 goals as he elevated Express to their first league title in close to a decade and the CECAFA Kagame Cup title.

But it has been an incredible year for Byaruhanga, starting with incredible performances for the Uganda U20 as they reached the U20 AFCON finals, where they lost to Ghana.

His assist for Derrick Kakooza’s third goal was a standout moment and one that gave him a strong shout to make the final selection for the Uganda Cranes CHAN team.

Though he did not make an appearance at the tournament, Byaruhanga was handed his senior Cranes debut by Abdallah Mubiru in July in an international friendly against South Africa.

From there, the foundation stone was laid as the holding midfielder became a mainstay under Micho ‘Milutin’ Sredojevic playing in all six of Uganda’s 2022 FIFA World Cup qualifiers – the only player to achieve that feat before their 20th birthday.

Bobosi said: “It is a pleasure to stand before you as the player of the year for 2021. I want to thank FUFA, for this award and the recognition.”

“I want to thank Vipers president Dr Lawrence Mulindwa and my teammates for the support, and my coaches for everything they have done to see my career develop.”

“I dedicate this to my mother who stood up for us after the death of my mother and my biggest fan Justus Mugisha who supported me with a bursary to stay in school during that tough moment.”

“It has been a tough journey for me from a kid in Kisoro, through the Airtel rising stars and then standing in front of you today as a winner,” he continued.

Najjemba, the captain of the Uganda U20 side was an integral part of the side as they reached the final of the CECAFA Women’s U20 Championship, with 11 goals in five games, finishing the tournament as the top scorer.

Najjemba scored three goals in three league games for Kampala Queens and also scored for the Crested Cranes as they defeated Ethiopia 2-0 in the first leg (of the second round) of the Africa Women Cup of Nations Qualifiers.

She edged out Lady Doves duo Fazila Ikwaput – winner of the award in 2017, and goalkeeper Daisy Nakaziro. The forward joins in the footsteps of Sandra Nabweteme, Hassifah Nassuna, Ruth Aturo and Juliet Nalukenge who won the award in 2015, 2016,

“I am happy and very excited. I am nervous,” Najjemba said, adding; “I have always dreamt of winning this award and I want to dedicate it to my parents.”

“I thank the organisers of these awards for this recognition. Credit goes to my teammates, coaches for the support they have given me.”

“It was not by mistake but I believe it came from hard work and I am happy that it has been recognised,” she exclaimed.

The awards were suspended in 2020, owing to the Coronavirus pandemic outbreak and disruptions to the Ugandan sporting calendar, but the returned for 2021 and took the previous 12 months into account.

Wasswa Bbosa was voted as the men’s coach of the year for guiding Express FC to an incredible seventh league title, and the first for the club since 2011, and the club’s first CECAFA Kagame Cup trophy in history.

Lady Doves coach Fred Musiime received recognition as the women’s coach of the year for guiding Lady Doves to their first FUFA Women Super League title and also oversaw a strong campaign in the zonal CAF Women Champions League qualifiers, where they reached the semi-finals.

Fahad Bayo received the first award of the evening as he was voted the Fans Favourite Ugandan Player. The striker who plays for Ashdod FC was a strong pillar in the Uganda Cranes World Cup qualification campaign scoring all three of the team’s goals during the campaign. ‘

Police FC were recognised for their discipline with the fair play award, Uganda Youth Football Association were awarded as the best member association, while Uganda U20 Hippos’ runner’s up finish at the U20 AFCON saw them receive the team of the year award.

How you can Dating Online