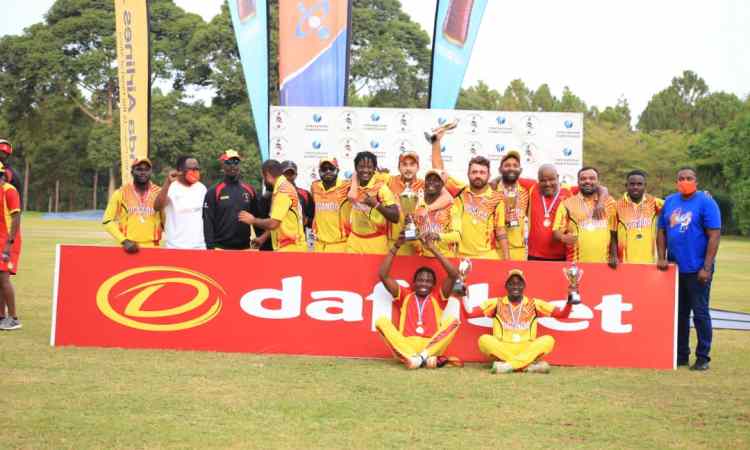 The Cricket Cranes won the series final by only six runs, with a resilient performance in what was a low scoring game at the Entebbe Cricket Oval.

Uganda came into the final with confidence and momentum on their side having collected the most victories the group stages that also included Nigeria.

Mahatlane’s side had won one against Kenya, and had lost their other test against the same opponents, and still carried memories of that one-run defeat to their cross border rivals in 2019 at Lugogo.

After winning the toss, Cranes captain Deus Muhumuza elected to bat first, and set the total for the Kenyans to try and chase.

Saudi Islam and Simon Ssesazi put up a meaningful partnership early on bowling out at 75/2. Islam produced 26 runs off 25 balls while Ssesazi produced 21 runs.

But the Ugandans struggled to build on their opening innings with only Ronak Patel producing an incredible 27 runs as the hosts were bowled out at 120/9 in their 20 overs.

In stepped Kenya who wasted no time chasing down Uganda’s total. Gurdeep Bhagat dominated the inning, putting on a score of 44/43 before he was bowled by Frank Akankwasa.

Nehemiah Ngoche followed in quick succession after only eight runs, while Kenyan captain Shem Ngoche was out in his 16th over to leave Kenya at 98/4 and a hue mountain to climb for victory.

The Cranes pushed for the victory with Kenya needing 13 runs in their last two overs. Nelson Odhiambo retired hurt, Dinesh Nakrani produced one run, while Eugene Ochieng’s wicket was picked.

Bilal Hassun was the hero for the Cricket Cranes, in the end, managing to defend eight runs in the final over giving away only two.

The series have produced double delight for Mahatlane after debutants Ssesazi, Hassun, Islam, Akankwasa and Ssenyondo came to the fore when the team needed them.

The unearthing of those players broadens the coach’s roster as he prepares for the Africa T20 finals in Kigali Rwanda next month.

All set for Pearl of Africa T20 series between Uganda, Kenya and Nigeria