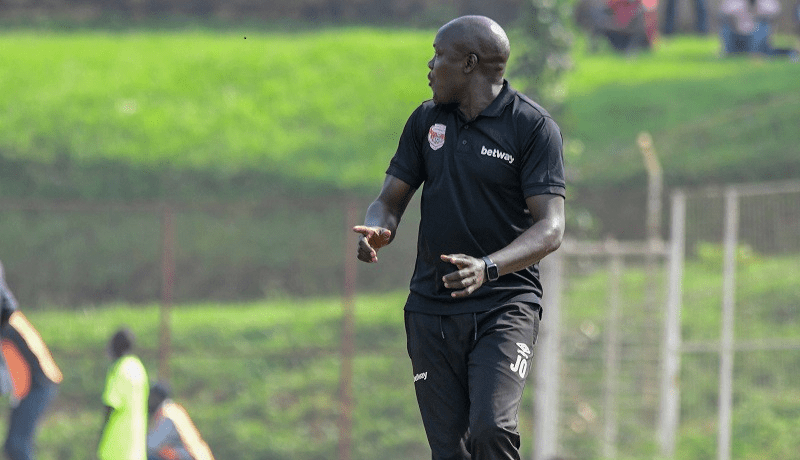 James Odoch has a victory on his record in the StarTimes Uganda Premier League as Express FC head coach as he finally pieced together a win for the fumbling champions.

An unfortunate own goal from George Kiryowa helped the Red Eagles claim a 2-1 win over Police FC at the Muteesa II Stadium in Wankulukuku, handing Odoch his first league in seven matches at the helm.

The fortunes of the club have not changed a bit since then. They have lost one and drew four of his first five games in charge before finally picking up the victory on Tuesday.

Odoch’s time in charge has seen the Red Eagles knocked out of the Uganda Cup at the round of 32 by rivals SC Villa.

Express has also conceded their title as they gap behind rivals Vipers has opened up to 16 points with eight games to play.

Their latest victory followed four consecutive draws, with the last of that run being an uninspiring goalless draw against second from bottom Mbarara City.

Odoch’s Express were yet again pedestrian in the opening exchanges, as Police dominated possession, taking the lead after only 12 minutes.

Police captain Tony Mawejje and striker Juma Balinya’s clever inter-change of passes set up the former who found the top corner on his weaker left foot.

Express almost replied immediately, but Enock Ssebagala was unlucky to have his effort bounce off the cross bar.

They were nearly made to pay for that miss as Mawejje once again combining with Balinya, drew a top save from Dennis Otim.

Express were invited back into the game after a moment of indecisiveness from Ruben Kimera led to a corner kick which resulted into the equaliser from George Ssenkaaba for his sixth goal of the season.

Barely 10 minutes into the second half, Kimera once again shot himself in the foot as his knock down fell for Ivan Mayanja, who initially planted his shot on the crossbar, but the ball bounced off Kiryowa into the back of the net.

Police had several near misses to draw level. Mawejje and Johnson Odong fizzling their shots inches wide, but there would not be a comeback for Abdallah Mubiru’s side.

Express complete the double over Police for a second season in a row, as they remain sixth on the table moving up to 36 points.

Police FC meanwhile slip into 10th position with their first defeat in seven games. They remain on 24 points, four points above the relegation zone.