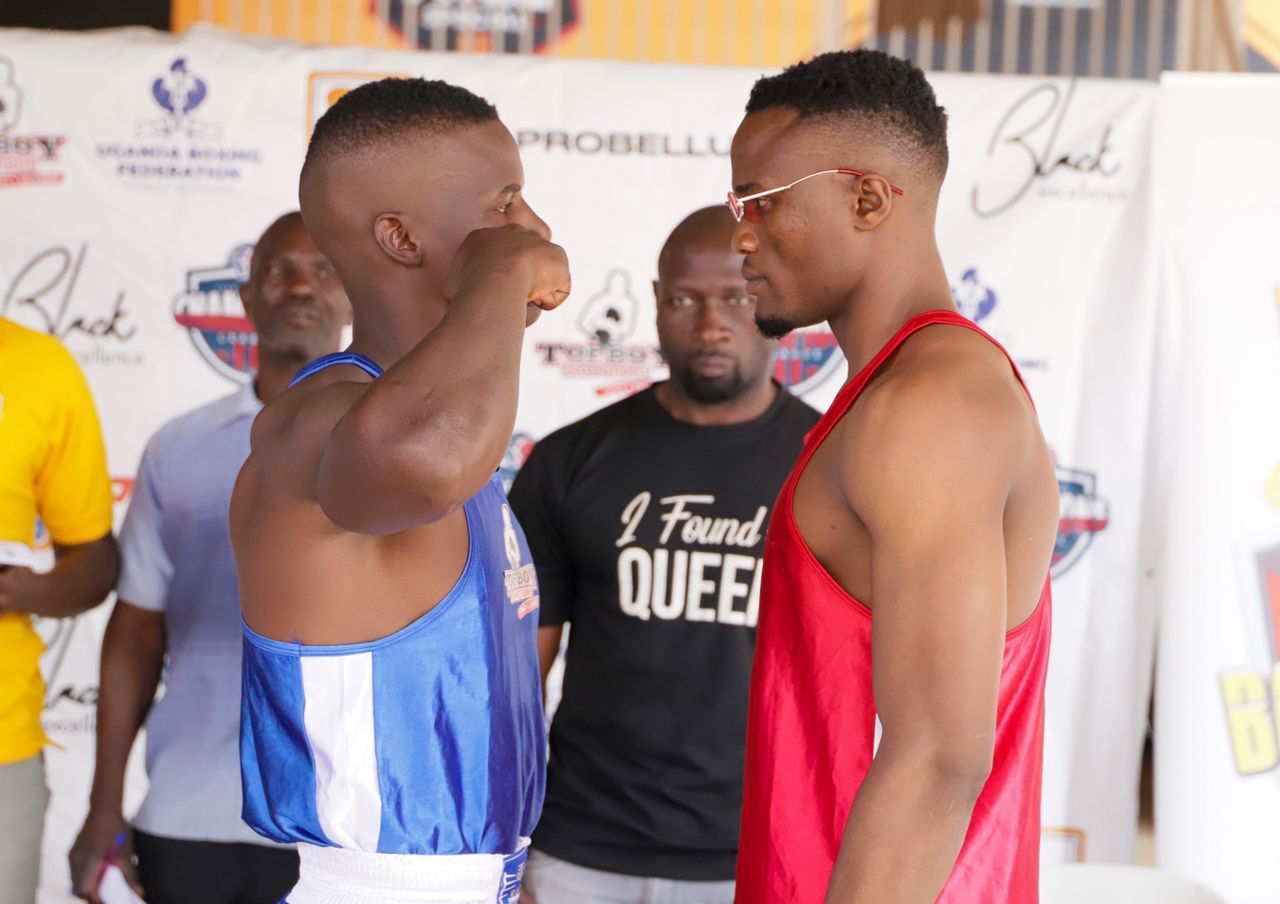 Kayiwa (blue) and Mukiibi (red) at the weigh-in

After confirmation by Uganda Boxing Federation (UBF) that the national boxing team (Bombers) for this year’s Commonwealth Games will be selected from the ongoing UBF Champions league, the competition has more than doubled as boxers try to impress the Bombers’ technical team for a possible slot to the Commonwealth Games due July in Birmingam, UK.

Only six slots were accorded to boxing by the Uganda Olympic Committee (UOC) and have to choose from the 11 campions league boxing weights.

“We are going to select the boxers from the Champions league competition because they are the only active boxers and who we have monitored.”

“Unless the government gives us funds for national team trials whilst time is not on our side. We have three months left and by now, the team would be in camp ust as other countries,” noted Moses Muhangi, the UBF president.

As all roads lead to week 11 of the inaugural Champions league this Saturday at Club Obligato, the much-anticipated bout has Edris Mikiibi and Lawrece Kayiwa clash in the main bout of the 12 lined up.

The two who drew in the first meeting are facing off in the light heavyweight (80KGs) affair.

According to Kira boxing club’s Kayiwa, his opponent, Mukiibi was saved by judges in the earlier clash and this time, only a knockout will count.

“He was saved last time out but this time, I have sharpened all the weapons to stop him. I want to stay the only lion in this weight and he is going to face a very hungry king of the jungle. The target is clear –national team,” noted Kayiwa during the weigh-in on Friday at Club Obligato-Bombo road.

For Mukiibi, Kayiwa is going to meet speed, technique and power as they face off again.

“I had an injured right shoulder last time and he failed to beat my jab when I had one hand.”

“Right now, I have both hands and am fully fit. He has been carrying loads to attain power but we are not going for powerlifting, this is boxing and I will teach him,” Kololo boxing club’s Mukiibi echoed.

Kayiwa tops the three-man group with 4 points from two fights as Mukiibi and Medi Mutebi follow with one and zero points respectively.

The only female bout on the card has Jema Mukisa against Nadia Najemba in the youth feather weight category.

Away from a slot to the national team, boxers who take part in the champions league have a chance to go professional under Probellum promotions company after UBF signing an MOU with the highly rated global boxing promotions company.

Catch the action live at your home of sport, Sanyuka TV starting at 8PM.

Uganda Cup: Balinya downs Gadaffi to send Police into round of 16

Details of Dating a Latina Female

How you can find Love — 3 Tricks to Make that Easier