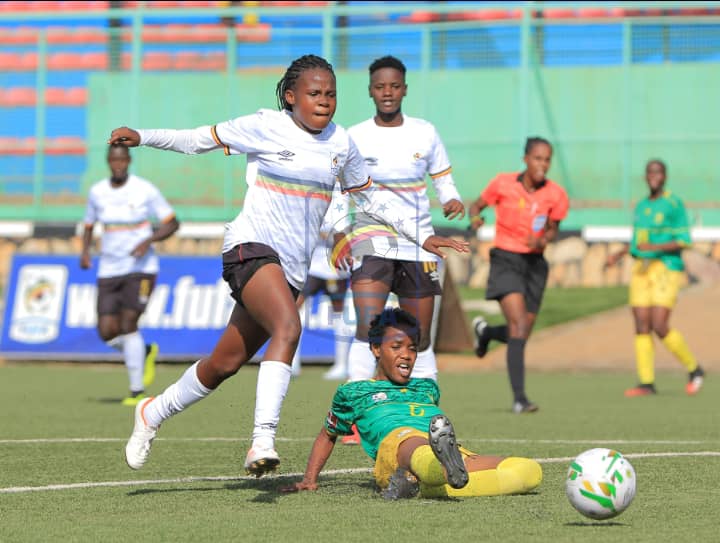 The Uganda U20 women national team holds the advantage at the halfway stage of their FIFA U20 World Cup qualifier tie with South Africa, after their 1-0 win at the St. mary’s Stadium in Kitende on Friday.

Hadijjah Nandago scored what is becoming a trade-mark opening goal, heading home from a corner, and set the pace for what was a comfortable performance for Uganda.

Returning to the scene of their incredible triumph over Kenya, the hosts dominated possession and controlled much of the game, limiting their visitors to little in terms of clear cut chances in the first half.

The match got off to a strong start for Uganda. Sumaya Komuntale drew a fine save from the South African goalkeeper Nthabiseng Ramaisha and then Aisha Nantongo her shot bounce off the cross bar inside the opening 10 minutes.

Ramaisha did incredibly well to keep her side in the game, and after 17 minutes, she was once again called into action this time denying Juliet Nalukenge from close range.

But her heroics were undone in the resulting corner as Nandago headed in Margret Kunihira’s excellent delivery.

Kunihira worked her magic and it nearly led to another goal for the hosts, but Nalukenge’s volley from an angle was tamed by Ramaisha.

The visitors hd a rare sight at Uganda’s goal at the half hour mark, but Chelsea Daniels put her header narrowly wide of the target, but shortly after, Uganda had the ball in the back of the net but Nalukenge had been ruled for offside.

The second half carried the same script, though South Africa had toughened up and put up a more resolute defensive display.

However, they seemed to have lost their legs in the final 15 minutes as Ayub Khalifah’s side threatened on occasions late on.

Margret Kunihira let fly from over 35 yards and agonisingly saw her shot bounce off the cross bar, while substitute Lillian Mutuuzo had a great opportunity to add to their advantage, but her shot missed the target.

At the final whistle, Uganda silently celebrated the victory, but will want to shift their focus quickly on the return leg scheduled for December 17 in Johannesburg.

How you can find Love — 3 Tricks to Make that Easier