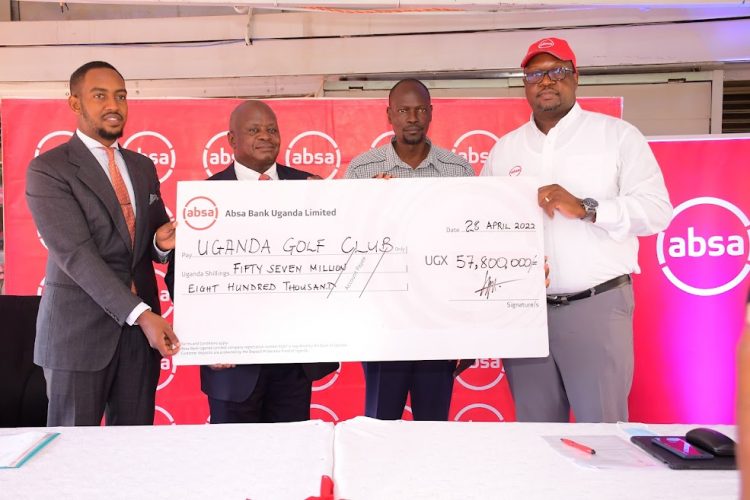 The Annual Captain’s Bell Golf Tournament hosted at Uganda Golf Club is slated to tee off on May 5 with professionals to May 7 with amateur golfers.

The amount will be shs27.8 million more than the shs30 million that the bank injected in last year’s tournament organised by Uganda Golf Club annually for both amateur and professional golfers.

“This year, we are once again coming on board as the official sponsor of the Captain’s Bell tournament which is a testament to just how important this club, this tournament and this game are to us as a bank,” said the Absa Managing Director Mumba Kalifungwa at the Uganda Golf Club on Thursday.

He explained that as the bank’s purpose of bringing possibilities to life, one of the ways to do it is through supporting sports, not only in Uganda but also in Africa and the world at large.

“We have been proud partners of golf through sponsorship of tournaments, most notably the Uganda Golf Open to support the development of sporting talent,” he said.

“As a result, we were able to sponsor 10 amateur golfers and 1 professional for the Magical Kenya Open.”

“We are proud as a group to be able to provide linkages to different opportunities across the continent, leveraging our footprint.”

“We believe in the value of sports as an avenue to bring people together but also as a strong passion point for us as Africans,” he added.

Annually, the captains bell is one of the most prestigious golf competitions on the golf calendar.  As a ritual, the newly elected captain hosts the competition as he unveils his committee at the beginning of his term in office.

Incoming captain Emmanuel Wamala and his deputy Paul Fitzgerald Nuwagaba, will be taking over from outgoing captain Patrick Billy and Dr Alex Coutinho.

This year, the pros will face-off for a share of the 10,000,000 Uganda shillings kitty on between May 5-6, while the amateurs will be in action on Saturday May 7.

Ronald Rugumayo won the last professional title and will have to face close to 40 other pros as he attempts to defend his crown.

7 Keys into a Successful Marital relationship