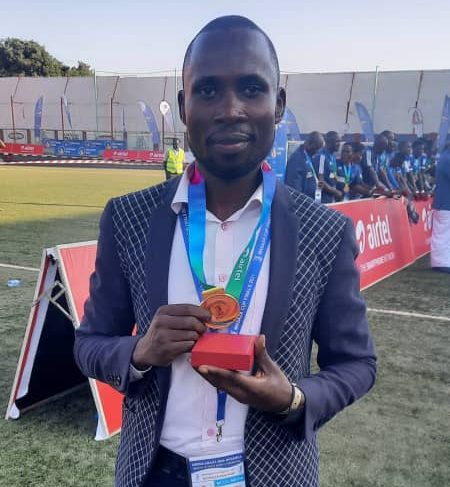 Next Media’s Martin Kaddu was among the few selected individuals awarded with medals by the Kabaka of Buganda Ronald Muwenda Mutebi II for their tremendous work towards the Masaza Cup and sports growth in the Kingdom.

Kaddu, senior sports journalist, football and boxing commentator is part of the media subcommittee of the Masaza Cup organizing committee, was rewarded with a golden medal by the Kabala after the 2021 Airtel-Masaza Cup final on Saturday.

“It is a great honor and huge inspiration to be recognized by the Kabaka. I am surely humbled,” noted Kaddu, who hosts Endiba Yaffe and Jab Jab shows on Sanyuka TV.

Thousands of Buddu and Buwekuulaa fans who flocked the St. Mary’s stadium in Kitende on Saturday to enjoy the final of arguably the most popular football show piece in the land.

By midday, the 20,000 seater stadium was packed to the brim yet outside, thousands wanted to force their way in.

What followed was a scuffle between the stadium security and the fans that were eventually let in by the event organisers.

Inside the Arena, it was an atmosphere of joy, as the Subjects of the king set sight on their man, Kabaka Ronald Muwenda Mutebi for the first time in a while.

The first half of the game produced some moments but no goals. In the second stanza despite the slow action, Buddu skipper Marvin Kawuma and Bruno Bunyaga found the net to give their side a 2-0 win and send the Buddu faithful into frenzy.

This is Buddu’s second title in five finals and both titles coming under the guidance of Steven Bogere.

The winners left 12 million Uganda shillings richer while the runners up got nine. In the earlier game, Bulemeezi edged Mawokota 1-0 courtesy of Gabriel Eragu to finish third and part with Shs7m and Shs5m respectively.

The Masaza cup final consistently remains one of the most watched sports events in Uganda and has of late attracted big sponsorship. Many players in the Uganda premier league have been spotted from this annual tournament.

College thinks Wife Have to do After a Divorce