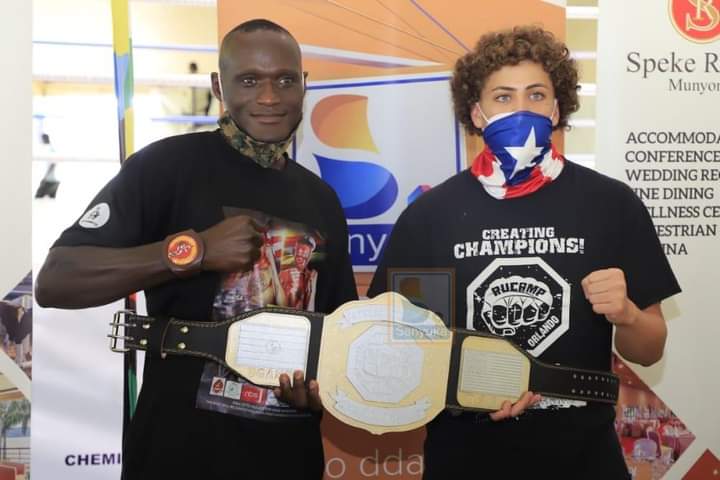 It was a battle of young and old as 35-year-old Titus Tugume faced 17-year-old John Camacho for an intercontinental belt in the k1 kickboxing style.

With no elbows or knees allowed, the two fighters had to dwell on punches and low kicks.

In the first round, the teenager troubled Tugume getting him floored once.

The young American impressed with his technique. His kicks and guard giving his sympathizers hope.

In the second round, Tugume was the aggressor as he cornered the seemingly tired teenager with an outpouring of punches until he was saved by the bell.

The third round was a formality. Camacho was almost out of breath. He finished the round with barely a kick or punch on his elder as he Struggled to keep his guard up.

During the interval after the 3rd round, Camacho’s coach Ruben Saldana threw in the towel for Tugume to celebrate his victory over the 17-year-old and lift the Intercontinental title by technical knockout with two rounds to spare.

If they were lessons picked, Camacho might have not won but he proved that he is one for the future.

Before the main fight, there were eight undercard bouts including the grudge match between UPDF’s John Tumukunde and Tom Nduga of Najja club which was won by Tumukunde after three rounds.