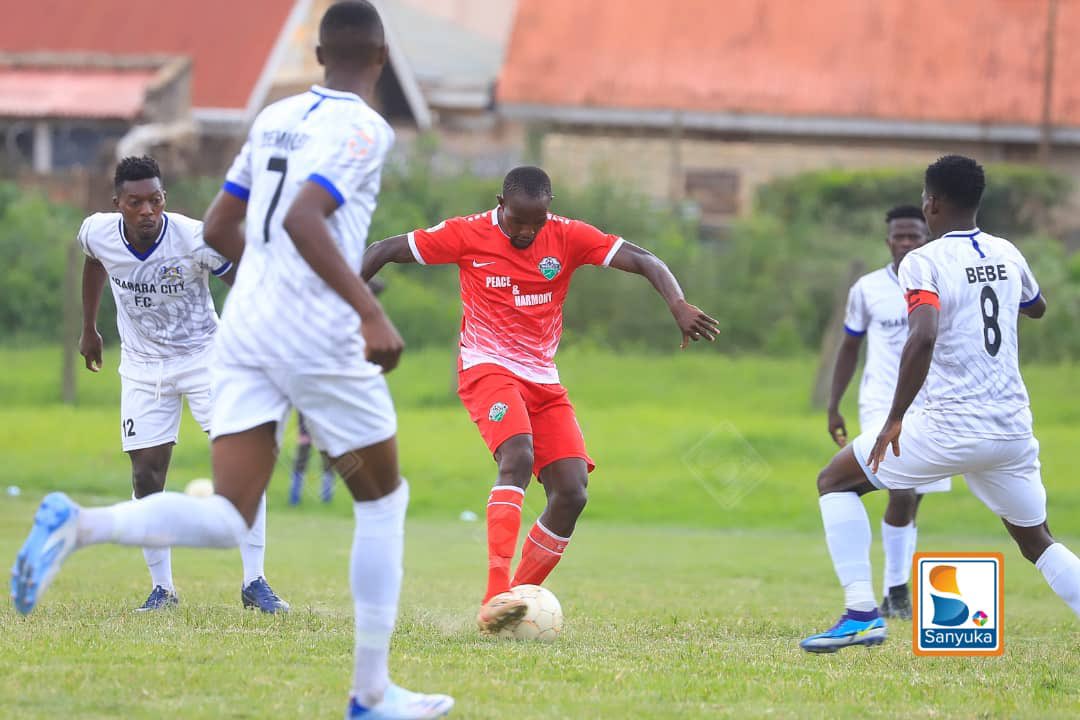 Amos Kirya’s strike from a sweeping counter attack handed Gadaffi FC a 1-0 victory over Mbarara City at the Kakyeka Stadium on Wednesday.

The striker scored his second goal of the season in the 19th minute with a low shot from just inside the penalty area after bravely racing through the Mbarara defence from inside his own half.

The Soldier Boys were dominant in the first half and had several opportunities to add to their lead, specifically looking dangerous on the counter attack.

Kirya was at the centre of much of Gadaffi’s counter-attacking approach but was also suspect for poor delivery after getting through to the crucial areas.

The Ankole Lions improved in the second half and were twice denied by the cross bar, while Gadaffi also had a ball cleared off the line as they managed to hold on for all three points.

Henry Kitegenyi, Jude Ssemugabi all had opportunities to pull their side level but failed to apply the finishing touch.

Solomon Okwalinga was twice denied by good saves from goalkeeper Paul Mujapwani who had replaced Ronald Mutebi in the first half after the latter picked up a knock.

The visitors though remained dangerous on the counter-attack, and Kirya struck the upright, while Ronald Bithum was denied by Muhammad Ssekeba.

Gadaffi was grateful for seeing out their first away victory of the season but Hussein Mbalangu’s body language at the end of the game summarised how frustrating the evening was for his side.

A third defeat from the last five games stirs the growing pressure on the coach, as the Ankole Lions remain 11th on the log with only 14 points from 12 league games.

A second victory from four games sees Peter Onen’s side rise into ninth position on 17 points from 13 games, as they prepare for the visit of URA FC in their first game of the new year.

At the MTN Omondi Stadium in Lugogo, Police FC maintained their resurgence as they picked up a third consecutive victory with a 5-0 hammering of Bright Stars.

The Cops who welcomed back head coach Abdallah Mubiru from suspension were heads and shoulders above their visitors and took only 12 minutes to take the lead through Juma Balinya.

Muwadda Mawejje made it 2-0 six minutes later, and they would go into overdrive in the final 25 minutes, with goals from Eric Ssenjobe, Herman Wasswa and Emmanuel Mugume extending their advantage.

Police rise into 12th position, going above Onduparaka on goals difference and open up a five-point gap over the relegation places.