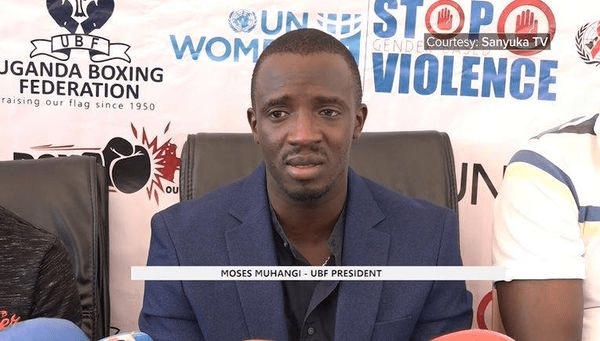 Muhangi says that the requirements to have boxing return in the prevailing situation are too expensive and the government is not willing to stand with them to meet some expenses.

“We are overwhelmed by the requirements to hold fights. National council of Sports says that if we are to organize competitions, we have to undertake boxers and official through COVID 19 tests, then we camp those who test negative for 14 days and again re-test them 72 hours before the competition. As a federation, we found out that it required us over 600 million to organize one competition yet the government gave us only 30 million for the previous two quarters,” Muhangi told this website.

Muhangi added that the government also denied them access to gyms which also makes their training difficult.

Uganda Boxing Federation was one of the fastest improving federations before the pandemic but the federation has missed out on a number of activities including among others the HIV awareness campaign, capacity building courses and defending their medals in Bingwa wama Binguwa. Despite the losses, the federation boss says that all was not lost and can still stand again if the government pulls their hand.

“It’s true we missed but still as a federation we managed to grab some opportunities that were at our disposal including engagements with Buganda Kingdom on a possible partnership, engaging fans and boxers through shadow boxing, keeping the federation visible by exploiting social media more than ever before in addition to engaging the main stream media. We just need the government to stand with the federation financially because we submit our budgets for our activities as required by National council of sports,” Muhangi said.

By the closure of sports activities in march 2020, Shadir Musa was the only Uganda boxer to qualify for Olympics and the federation had hoped for more to qualify but since the next qualifying window is slated for May this year in France with no official training going on, chances are high that Shadir shall be the only Uganda boxing representative in Tokyo Olympics.