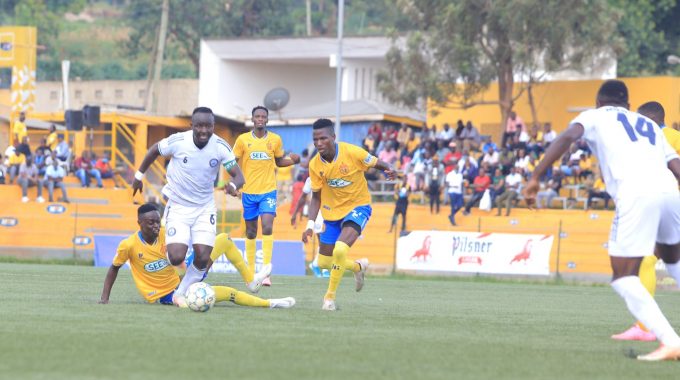 Abdallah Mubiru has refused to play the underdog card as he believes his Police FC side has the potential to take all three points against KCCA FC on Tuesday.

The Cops host their land lords at the MTN Omondi Stadium, in the second installment of the Lugogo derby this season as the StarTimes Uganda Premier League enters its final stretch.

Both teams chasing differing ambitions come the end of the season. Police is still not guaranteed of safety while KCCA are in the midst of a tip-toe race for the title against Vipers.

Speaking to the press ahead of the game, Mubiru cranked up the preparations the for the glamour meeting by suggesting that the Kasasiro Boys are there for the taking.

“We have the potential and quality to win (against any team in the league) not only against KCCA. So, we must carry the belief into every game that we play,” Mubiru said.

“I expect a quality game tomorrow going by our recent meetings. The fixture has become a notable one especially over the last few years given the quality of football and performance.”

“The level is always high when we play against them, and tomorrow will be no exception. And at the moment, the ambitions being chased by either side makes it even more competitive.”

“They will want to win because they still have a shot at the title, but we are also still chasing survival and we are aware that the three points will be huge for us and they will leave us in a good position,” he added.

Police has resurrected what looked a doomed season and go into the game in 10th position with a four point cushion over the bottom three.

Meanwhile, only two points separate KCCA from rivals Vipers at the top of the table. But Morley Byekwaso’s side are not coming into the game with an impressive run.

They passed on the chance to go joint top after producing a disappointing performance in the goalless draw against rivals SC Villa.

It was the fourth draw for the 13-time champions from their last seven league games, a run where they have won only two games.

Police on the other hand have lost only once in 10 games since they were defeated 3-1 by KCCA in December 2021. That defeat then ensured that Police were winless in their opening 10 games of the season.

Police has however not defeated KCCA in over a decade. They have picked up only five draws against KCCA since Mubiru took charge in January 2017, and have suffered five defeats.

Johnson Odong will be an important absentee for Police with the forward out with an illness while Tony Kiwalaze is suspended for the game after accumulating three yellow cards.

Duncan Sseninde and Muwadda Mawejje may be recalled for the task with the pair involved in training the whole week.

Byekwaso may still miss another game for KCCA as he is still on leave due to an illness, with midfielder Gift Ali uncertain for the game as he still carries a knock.

Charles Lwanga is a ready to be recalled to the first team, while Yasser Mugerwa has stepped up his recovery from a knock.

In the other games on Tuesday, UPDF who are on an 11-game winless run host Wakiso Giants at the Bombo Barracks Grounds. The Purple Sharks are on the back of a 3-1 victory over Mbarara City.

Bright Stars continue their battle for survival with a trip to the Barifa Stadium to face Arua Hill SC.

Uganda Cup: Balinya downs Gadaffi to send Police into round of 16