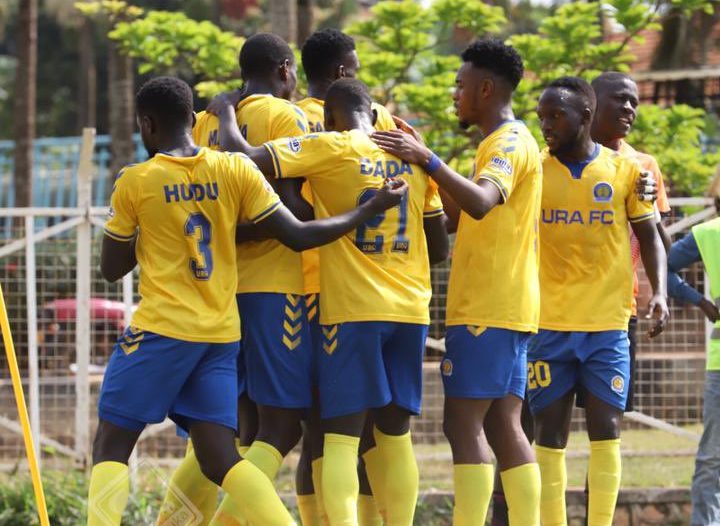 Steven Mukwala was gifted an easy double as URA FC beat Bright Stars 3-0 to move into fifth and hand a Paul Kiwanuka a first defeat at the club at the Kavumba Recreation Grounds on Tuesday afternoon.

Kiwanuka, who was taking charge of his first game of the club in his second stint at the club, was left disappointed as his side failed to put up a fight as they suffered their eighth defeat of the season.

The Tax Collectors took to the game like a wild fire, and nearly took the lead after seven minutes, only for Mukwala to poorly execute a header from five yards from Shafik Kagimu’s deep free kick.

URA continued to find loads of space within Bright Stars’ defensive lines, as Vianney Ssekajugo fired straight at goalkeeper, while Ibrahim Dada failed to apply a finish on Mukwala’s cross.

Ssekajugo then made the hosts pay for their below par defensive display as he beat Issa Bugembe to a poor clearance from Tamale, and was then allowed to have an effort at goal, curling a shot into the top corner.

URA managed to arrive at the half time break with a 1-0 lead, but Bright Stars could have pulled level had captain Nelson Ssenkatuka provided proper finishing when necessary.

Paul Kiwanuka demanded a response from his team, and had a period early in the second half when they could have pulled level, but were still lethargic in front of goal.

Andrew Kaggwa and Ssenkatuka both glanced their headers wide of the target when they found themselves with space in front of goal.

Tamale, usually dependable suffered a howler as he rushed out of goal and failed to clear the ball before fumbling with the lose ball allowing Mukwala to finish easily in the 57th minute.

Mukwala was again given another gift after defender Allan Katwe played a slow back pass to his keeper, allowing Mukwala to intercept, round the keeper and slot into an empty net.

It was the first time a meeting between the two produced more than two goals since 2014, and the three points hugely aid URA’s charge towards the top three.

They are now three points behind champions Express in third, and six points behind leaders KCCA FC, and they still have a game in hand against Express.

Bright Stars meanwhile lose the chance of climbing out of the bottom three as they slip into 15th below Busoga United who play URA on Friday in their game in hand.