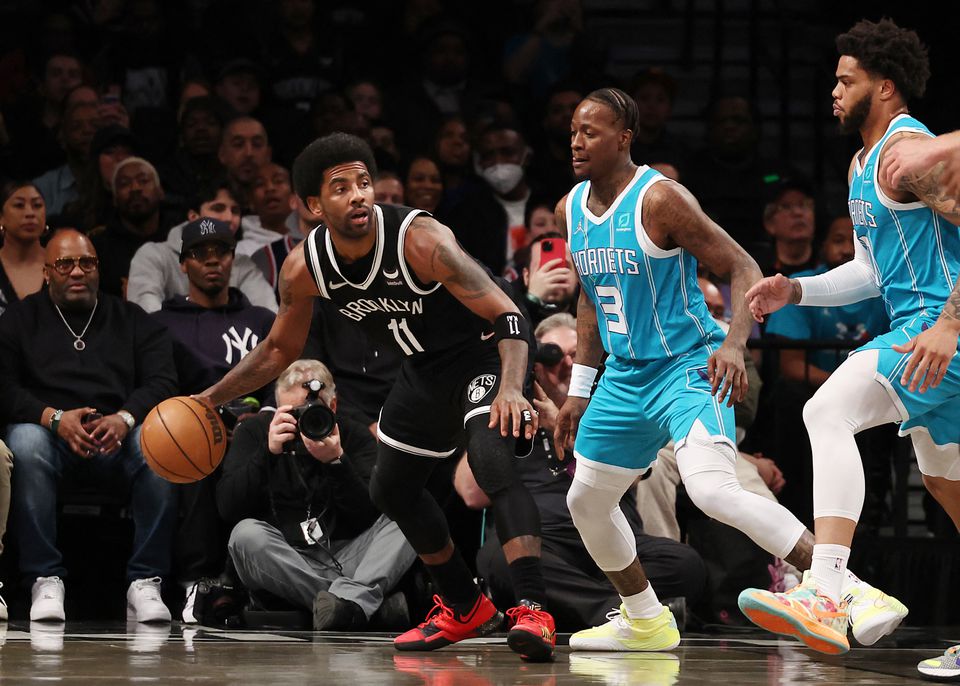 LaMelo Ball scored 33 points and handed out nine assists, leading the Charlotte Hornets to a 119-110 victory over the Brooklyn Nets on Sunday night to spoil Kyrie Irving’s first home game of the season.

Ball scored 18 points and hit five of his seven 3-pointers during the third quarter, when the Hornets (39-36) outscored the Nets 37-29 after trailing by 14 almost midway through the second quarter. Ball made 10 of 21 shots from the field and hit seven of Charlotte’s 17 3-pointers.

Irving finished with 16 points and 11 assists after not being permitted to play in any Brooklyn home games because of New York City’s rules on unvaccinated athletes. The rules were lifted on Thursday. Kevin Durant led the Nets with 27 points, and Andre Drummond collected 20 points and 17 rebounds

Miles Bridges added 24 points as Charlotte pulled into an eighth-place tie with Brooklyn (39-36) in the Eastern Conference. P.J. Washington contributed 18 points and Terry Rozier 14 as the Hornets won for the seventh time in eight games.

Deandre Ayton had 14 points and 12 rebounds for the Suns, who have won their last six meetings against the 76ers. Landry Shamet scored 12 points and Mikal Bridges added 11.

Joel Embiid paced the Sixers with 37 points and 15 rebounds, while Tyrese Maxey scored 18 points. Phoenix improved to 45-0 this season when leading after three quarters.

Dallas outscored Utah in the third quarter, 32-20, then erupted for a 17-9 run over the first 5:55 of the fourth quarter to effectively put the game away. Reggie Bullock finished with 23 points and a career-high-tying seven 3-pointers for the Mavericks, who passed the Jazz for fourth place in the Western Conference with seven games to go.

The Mavericks held Donovan Mitchell, averaging 26.1 points per game coming into Sunday’s matchup, to 12 points on 4-of-13 shooting. Rudy Gay led the Jazz with 18 points and grabbed eight rebounds.

Tatum, who scored 17 points in the third quarter, made five 3-pointers to send the Celtics to their sixth straight win and 24th in their last 28 games. Boston, which outscored Minnesota by a 38-19 margin in the second quarter, shot a robust 56.5 percent from the floor and 43.6 percent from 3-point range for the game.

Anthony Edwards scored 24 points and Karl-Anthony Towns added 19 for the Timberwolves, who have lost three of their last four games. Minnesota fell despite shooting 53.6 percent from the floor and 43.8 percent from 3-point range.

Rookie Trey Murphy III, who finished with 21 points, led a third-quarter Pelicans comeback before Ingram, who had been sidelined by a hamstring strain, took over in the fourth. Jonas Valanciunas added 19 points and 12 rebounds, CJ McCollum scored 18 and Herbert Jones Jr. had 16 points and a season-high six steals as New Orleans moved a half-game in front of the Lakers into ninth place in the Western Conference.

LeBron James scored 39 points, Malik Monk added 23 and Russell Westbrook had 18 for the Lakers, who were outscored 67-39 in the second half.

RJ Barrett had 21 points and nine rebounds, and visiting New York extended its winning streak to three games with a victory over Detroit.

Julius Randle, returning after a three-game absence due to a quad injury, had 20 points, seven rebounds and five assists for the Knicks. Alec Burks and Immanuel Quickley supplied 18 points apiece, Evan Fournier added 11, and Obi Toppin had 10.

Marvin Bagley had a season-high 27 points and seven rebounds for the Pistons. Cade Cunningham had 18 points and seven assists. Detroit’s top scorer, Jerami Grant, missed the game with a left-calf strain.

Rookie Corey Kispert shot 6-of-9 from 3-point range and scored a career-high 25 points to help host Washington past Golden State.

Kispert’s six 3-pointers — also a career-high — nearly matched the Warriors’ output from beyond the arc as a team. With Stephen Curry sidelined for the fifth consecutive game due to a foot injury, Golden State shot just 8-of-33 from deep.

The Wizards went 16-of-28 behind the 3-point line, including 3-of-3 from Kentavious Caldwell-Pope, who finished with 22 points. Klay Thompson and Jordan Poole scored 25 and 26 points to lead Golden State.