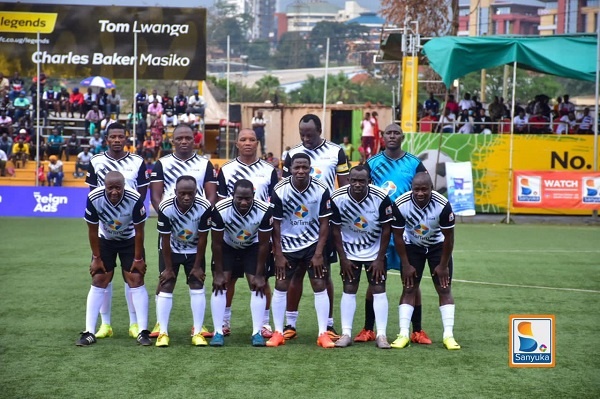 With just months of life, the ‘Ojjukira legend wo’ campaign initiated by Proline FC in partnership with Next Media, StarTimes and True North has started to bear fruits.

On Tuesday morning, Members of Parliament through their football team handed over a contribution of UGX 11 million to the former players’ association at the MTN Omondi Stadium in Lugogo.

“I am honoured to present this token of appreciation from the parliamentarians towards the ‘ojjukira legend wo’ campaign which we continue to be proud of being a part of,” Basalirwa told Sanyuka TV.

“We were at this same venue in October where we played in an exhibition game with the legends of Ugandan football, and we made a promise of continuing to reach out to these former players and supporting the campaign.”

“We are aware of the objectives of the campaign, and we agreed to extend support to the project as we continue to try and help their association achieve its ambition of alleviating the lives of our former stars,” he added.

The handover was done after the MPs’ morning training session as they continue preparation for the East African parliamentary games due December 5-18 in Arusha, Tanzania.

Mayanja, who received the cash on behalf of the members, was very grateful to the legislators before calling on the head of state Yoweeri Kaguta Museveni to also extend support towards the campaign.

“I applaud our legislators for having fulfilled their pledge,” Mayanja said after receiving the sum, adding; “We had a good game, the fans enjoyed and the players themselves ahd as much fan on the day.”

“Everyone saw some of these stars and they played their hearts out for the national team, and during their time of need, we need to support them as much.”

“This campaign should be a national cause, and I want to extend a call to the president Museveni to also reach out because he is a lover of sport and former player so he knows the plight of our stars,” Mayanja stated.

Mujib Kasule, one of the initiators of the Ojjukira Legends wo campaign, further stressed that this is exactly why they started the campaign.

“This is one of the reasons why we started this campaign. We are starting to see it bear fruits but there have been other incredible benefits reached thus far,” Kasule explained.

“Many of our former stars had been forgotten and we could only hear about them when they are either in poor health or after they have dies.”

“But we have seen them given a new lease to life with the formation of their association, some of them have received other support from friends and well-wishers.”

“We are not resting as yet; we want to ensure the public that the campaign is still going on and we have a lot lined up that we shall unveil in the future,” he continued.

The association is also part of the successes that have been registered by the campaign thus far, and it is geared towards finding a lobbying ground for the former players as they seek to fulfil one of the core objectives of the campaign.

The Legends earlier played to a 5-0 win over the members of parliament in an entertaining friendly match played on Independence. All proceeds from this first of a kind campaign are aimed at supporting some of the struggling ex Ugandan football icons.