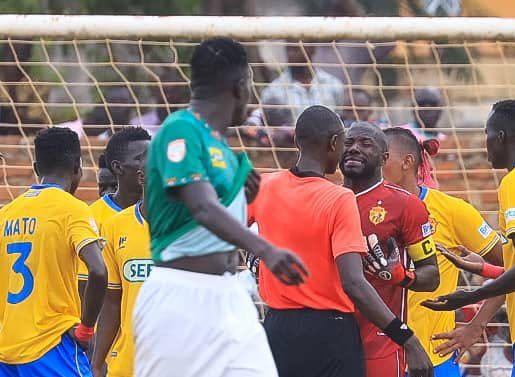 Onduparaka’s StarTimes Uganda Premier League match against KCCA FC was called off following fans protests and pitch invasions against a penalty decision in the eighth minute of added time.

The game played at the AbaBet Green Light Stadium had almost run its entire course when a decision by referee Ronald Madanda to award a penalty to the visitors irked the home fans.

A section of the Onduparaka fans got onto the pitch while some strongly dissented the decision and pelted bottles of water towards the assistant referee Micheal Kalule, before delaying the penalty being taken.

The moment that caused the disruption involved what looked an innocent and fair coming together of defender Ahmed Amayo and KCCA striker Brian Aheebwa just inside the box.

Police and the military police were called in to diffuse the situation, while discussions on whether to continue the game went on, before it was eventually decided that the game could not be completed.

We shall have to wait for a decision for the Federation of Uganda Football Association’s (FUFA) Competitions Disciplinary panel, but Onduparaka could face sanctions that include losing the game by forfeiture and docking three more points from the ones that they have already accumulated.

The penalty once taken would have provided the final kick and piece of action from the game that had produced an enthralling contest and plenty of drama throughout the 90 minutes.

The Caterpillars took the lead in exquisite fashion as defender Rashid Okocha – returning from suspension – volleyed a right foot shot into the top corner after the Kasasiro Boys had poorly dealt with a corner.

Morley Byekwaso’s men came back fighting to maintain their unbeaten run, and equalised shortly after with Sadat Anaku setting up Arafat Usama to volley a low drive into the bottom corner.

Anaku then popped up with a goal of his own, planting Herbert Achai’s cross beyond Mathias Muwanga.

At the stroke of halftime, the first bit of drama ensued as Madanda awarded the hosts a penalty that was heavily contested by KCCA, after the ball seemed to have bounced off Ashraf Mugume’s arm.

Muhammad Shaban stepped up to send the goalkeeper Benjamin Ochan the wrong way and restore parity at the stroke of half time.

The second half went by minus any major incidents besides Jimmy Ndalamba’s red card in the first minute of added time for time wasting.

The interruption to the game sees KCCA lose their place at the summit of the league especially following rivals Vipers SC’s 7-2 demolition of UPDF FC at the St. Mary’s Stadium in Kitende.

SC Villa also made short work of bottom of the league side Tooro United, condemning them to an 11th straight defeat.

Salim Abdallah opened the scoring for the Jogoo before Nicholas Kabonge, Benson Muhindo and Goffin Oyirwoth added the other goals at the FUFA Technical Centre in Njeru.