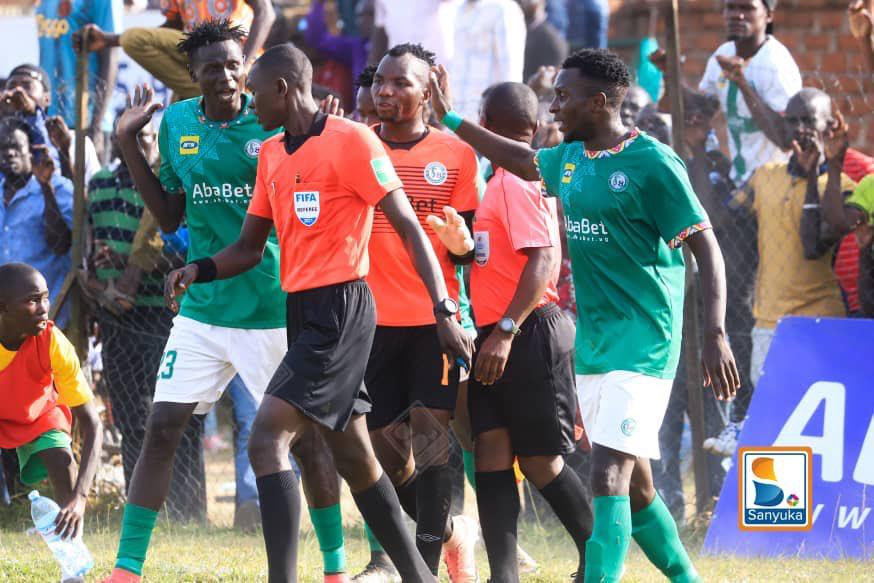 The Federation of Uganda Football Association’s Competitions Disciplinary Panel (CDP) has slapped Onduparaka FC with a two-point deduction for crowd trouble at the AbaBet Green Light Stadium during their StarTimes Uganda Premier League game with KCCA FC on December 27.

Onduparaka fans caused violent scenes during and after the game, attacking the away fans and also invading the playing surface after a contentious penalty was awarded to the visitors in the 97th minute.

The unsavory scenes in Arua also saw security officials including police and the military police to fire tear gas and fire warning shots to disperse the crowds.

The club has also been handed a suspended one point and one goal deduction and suspended closed stadium sanctions for home games.

“Sanctions for Onduparaka FC for breaching Article 31(10) (b), Article 31 (10)(a) and Article 31(10) (f) (iii) of the FUFA Competitions Rules which highlight acts of hooliganism, abandonment of a match, order and security both inside and outside the stadium before, during and after matches,” a statement said.

“Whereas the Competitions Rules and Regulations provide for a deduction of three (3) points and three (3) goals for the intense hooliganism and violence, Onduparaka is hereby sanctioned with; an immediate deduction of two (2) points and two (2) goals from those already accumulated by the club.”

“A suspended one (1) point and one (1) goal deduction and a suspended closed stadium sanction for home games,” the statement added.

The CDP has also ordered for a replay of the abandoned match despite more than two minutes of the five added minutes being played, with the panel arguing that the game needed to find a ‘sporting conclusion’.

The said replay shall be played at a neutral venue, with the date and venue to be decided by the league secretariat while Onduparaka retains the responsibility of organisation of the match.

FUFA further promised to give both clubs a contribution of UGX 2,500,000 each for the replay.

“The CDP hereby orders a replay of the match #101 between Onduparaka FC vs KCCA FC which shall enable the results of the match to be determined sportingly,” the statement continued.

“Onduparaka FC remains with the responsibility of the matchday organisation of the replay ordered in par (3) above as the home team.”

“FUFA shall give a contribution of UGX 2,500,000 (Uganda shillings Two million Five Hundred Thousand) to each club and shall forward the said monies to the respective club accounts for that purpose,” it continued.

Okocha, who was in November handed a two-week suspension for violent conduct towards a referee has been given a six-month suspension from football and also fined UGX one million.

Saba Saba for his conduct has been suspended for 90 days which may be extended for 45 days upon further investigations.

“Rashid Okocha has been banned with immediate effect for breaching Article 31(2) and Article 31(3) as he attacked a match official and is a repetitive offender,” the decision stated.

“The above fine is to be paid by May 31, 2022, and failure to pay shall lead to automatic suspension until the fine is paid in full.”

“Should Mr Rashid Okocha fail to heed to the sanctions above, the CDP shall be constrained to take stronger disciplinary measures against all parties involved,” it explained.

The statement added: “The FUFA Investigation Chamber of the Ethics Committee hereby provisionally suspends Edson Saba Saba from all football-related activities (administrative, sports or any other) for 90 days. The suspension comes into force immediately.”

“Preliminary investigations conducted, and with support of the match report indicate that Edson Saba Saba incited violence amongst the fans by telling them not to get out of the field of play, and he protested the penalty with threatening words and gestures.”

“Saba Saba also hurled insults at match officials and incited violence against them, and the above actions are contrary to the FUFA Competitions Rules and Regulations.”

Referee Ronald Madanda who was in charge of the game has not been spared from the wrath as he has been suspended from football activities until 20th June 2022.

Madanda whose decisions are believed to have sparked the violent reaction of the fans failed to ‘justify the poor officiating which gravely affected the match.

“The matter is further forwarded to the Investigation Chamber of the Ethics Committee to further investigate whether the incorrect decisions of Madanda were intended to influence the results of the game and be dealt with under the FUFA Ethics Code,” it continued.

Despite the sanction, Onduparaka remains 13th on the log, with 10 points but are now three points away from the relegation places.