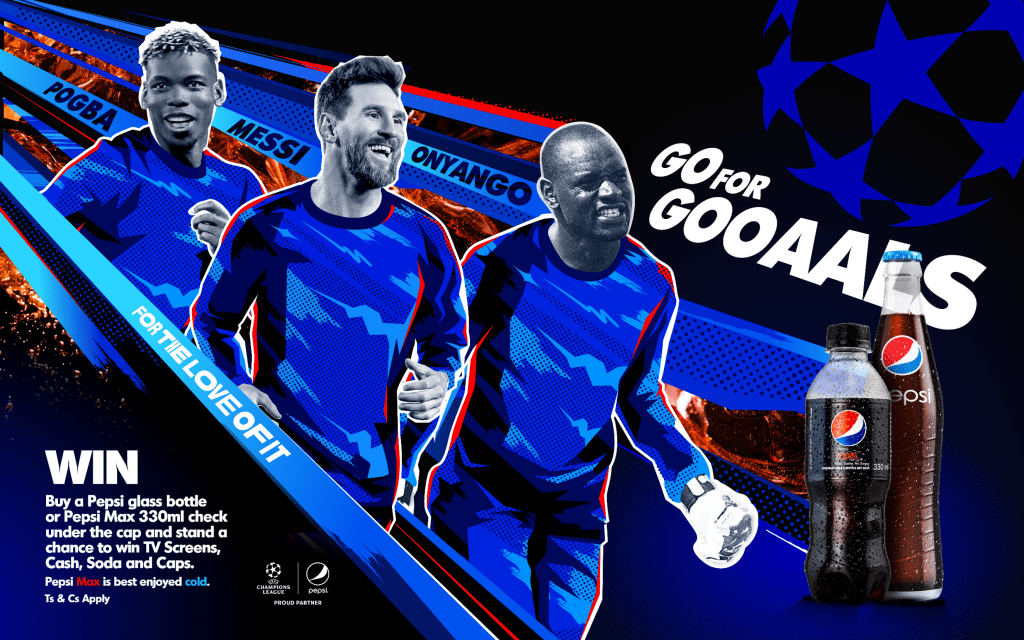 Former Uganda Cranes captain Denis Onyango is part of a star-studded team of world class players who been included on the lates Pepsi advert for the 2021/22 UEFA Champions League.

Dubbed the ‘Go for Goals’, the campaign will run for 3 months giving customers a chance to win amazing prizes such as TV screens, Cash, T-shirts, Caps and so much more.

The 2016 African best player based in Africa will line up alongside seven-time Balon d’or winner and PSG forward Leonel Messi together with Manchester United midfielder Paul Pogba.

“Pepsi is a brand that gives everyone a platform to realize their dreams,” Onyango said, adding; “It is an honor to be working with the Pepsi team.”

“The brand has stood the test of time and a clear testament that giving up is NEVER an option. Let’s keep on chasing our dreams, they are valid,” he added.

Century Bottling company Head of Marketing Timothy Luzinda revealed that this year’s campaign is designed to ensure that their customers’ passion and love for the game is fulfilled.

“Since becoming a sponsor in 2015, the Pepsico and UEFA partnership has become stronger and more exciting delivering for both our brand and our consumers,” Luzinda said.

“It is the largest global platform, and we are excited to be part of it and participate each season. We understand how much our customers love football.”

“Upon buying a 300ml returnable glass Pepsi bottle or a Pepsi max 330ml PET bottle, the customers shall stand a chance of winning lots of prizes such as cash, TV screens, T-shirts, Caps and sodas,” he added.

Pepsi Brand Manager, Ernest Ssentongo noted that this year’s campaign is bigger and more exciting as proceeds from the campaign will go towards supporting expectant mothers through the Denis Masinde Onyango foundation.

He also revealed that the company is pledging to match every shilling Ugandans donate towards the foundation up to a tune of five million Ugandan shillings.

Leo Messi: “It’s always great to be back with the Pepsi team. Pepsi is a brand that celebrates doing things in your own way, and that is something that has always resonated with me.”

“This year is no different and I am personally inspired to share the message that it doesn’t matter who you are or where you are from or how crazy your dream is.”

“You have to go after it with passion and dedication to achieve everything you want.”

Paul Pogba: “Every year these campaigns get bigger and better, and this year it’s all about inspiring the next generation and changemakers in the game – on and off the pitch. It was great to work with the passionate and inspired Pepsi Collective members.”