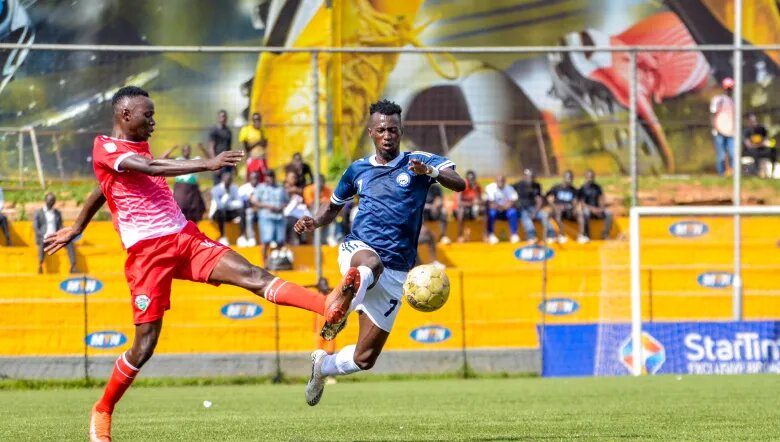 Police FC missed the opportunity to open up further ground on their relegation rivals Onduparaka, Busoga United and UPDF as they battled to a goalless draw at the Gadaffi Arena in Jinja.

In any other season, the clash between these two who started the day in eighth and ninth would have been a proper mid-table clash with nothing much riding on it.

But the peculiar nature of the relegation battle means that the Cops are not sure of safety, while Gadaffi are urgently peering over their shoulders as the fear being dragged into the battle.

Police who still hold a four-point gap over the relegation places started brightly, with Ruben Kimera’s speculative corner kick bouncing off the woodwork.

Tony Mawejje reacted to the rebound, but his effort was dealt with by Paul Mujapwani. The game however, had few goal opportunities as the visitors’ first wave of dominance regressed.

Police coach Abdallah Mubiru was forced into a first half substitution as defender Eric Ssentume limped off with injury. George Kiryowa was brought on to replace him.

The second half saw Gadaffi take more of the attacking initiative, drawing a finger-tip save from goalkeeper Abdul Kimera on 51 minutes.

Mujapwani had to much Kimera’s incredible save by pulling off one at the other end as he stopped Yusuf Ssozi’s volley.

Kimera later ensured that Police at least gained a point from their travels as he made a good save to keep out Mark Bamukyaye’s free kick.

Elsewhere, relegation rivals UPDF and Bright Stars played out to a goalless draw at the Kavumba Recreation Ground.

Mutebi set to be appointed AS Kigali coach