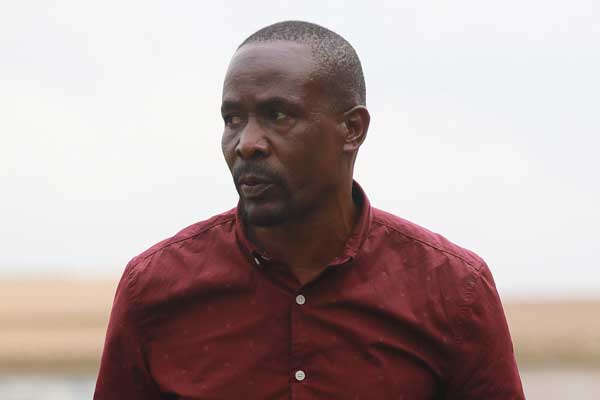 Abdallah Mubiru questioned the ‘motive behind the appointment of referee’ Deogratius Opio Oguti, and criticised the officials’ performance after Police were beaten by Onduparaka in the StarTimes Uganda Premier League.

Emmanuel Oketch’s 95th-minute winner was enough for the Caterpillars to earn all three points, with Mubiru suffering six consecutive defeats for the first time in his coaching career.

There were profuse complaints from Police players when Oguti allowed Onduparaka to start a goal kick in a situation where they felt they clearly had to be awarded a corner kick.

A quick restart startled the visitors who were outnumbered as Nathan Oloro teed up Oketch to score deep in added time.

Police had already been reduced to 10-men after 25 minutes, with midfielder Yusuf Ssozi shown red. A decision that sparked heated dissent from Mubiru and members of his technical staff. Mubiru did not survive the incident and was also sent off.

The Police coach felt that the match official was ‘overly unfair’ to his side, and said he was frustrated to lose the match on the basis of such a decision after a spirited display from his side.

“We have lost 1-0,” Mubiru told media after the game, adding; “We are very unfortunate especially in the way the game was handled. There was a lot of injustice and probably that is how it was intended to be.”

“You cannot appoint all the match officials starting from the match commissioner to the referees when they are coming from the same region. What do you expect then?” he pondered.

“They were issuing red cards without any incidents, Onduparaka committed countless fouls but the referee turned a blind eye.”

“Then two penalties denied after our opponents fouled in the box, the referee takes some time to whistle and then decides to award a free-kick on both occasions.”

“The officials then added five minutes but the game ended up being played for 10 minutes. Besides that, during the moment we conceded, we were supposed to have a corner but the referee allowed Onduparaka to re-start with goal-kick and went on to score as our players were preparing for a corner.”

Mubiru’s frustration adds to the growing incidents of incompetence and poor officiating that has been at the fore of several games this season and insists that the level of officiating is a danger to the league.

“This sort of injustice is unfortunate to our game especially to those who enjoy it. I know very well that my comments will be turned upside down and me who is trying to tell the truth about what happened will turn into the culprit,” the former Uganda Cranes assistant coach stated.

“I am not bothered at all with whatever decision they come up with, because I am very happy and satisfied that I am telling the truth.”

“I am very sure that members concerned will have to pay for it in front of our God because they are tasked to be fair, but them doing what they did, they will be answerable to God,” he continued.

The defeat which condemned Police further to the bottom of the league standings, as they are the only club yet to collect a point this season, was only part of a rough trip for the Cops.

On their way back, the squad were stranded at Wadelai in Pakwach District after their bus broke down a couple of hours after departing Arua.

The team spent a couple of hours in Pakwach as repairs were being run to get the bus running again. They were not helped after an engineering team sent to work on the bus had to first divert to another stranded Police lorry.

Mubiru and his players will have to put the events of the trip behind them quickly as they embark on preparations for a home tie against Mbarara City at the MTN Omondi Stadium on Friday.

Morocco vs Malawi – Game of our lives