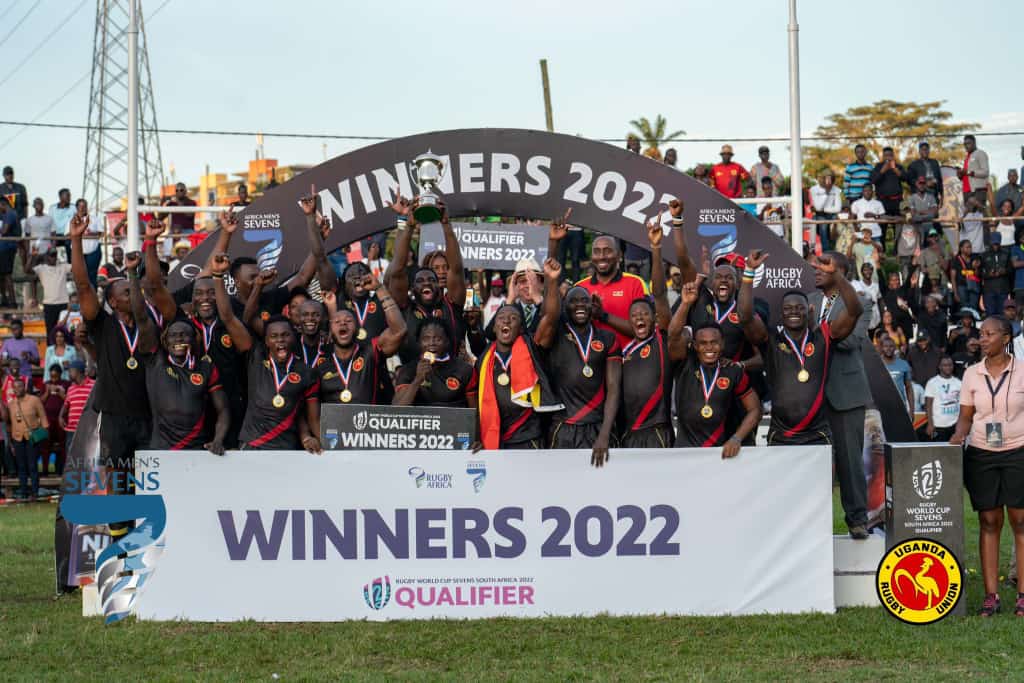 In many ways, it was a title several months in the making for the Uganda Rugby Cranes as they laid down the marker with a dominant victory at the 2022 Rugby Africa sevens over the weekend.

Whatever the Cranes did in the two preparation camps in South Africa and in Kampala before the tournament started worked. Tolbert Onyango’s team played well enough for their third African title.

When the Cranes kicked into gear, there was no team of the other 13 that provided opposition that could stick with them.

They possessed a mean defence and made their try-scoring plays stick, in front of an electric atmosphere from a supportive crowd.

The Rugby Cranes 26-00 victory over Zimbabwe in the final on Sunday only confirmed what everyone perhaps knew that they were the best team at the two-day event held at the Kyadondo Rugby Grounds.

the moment of national importance as the Cranes lifted their third African title and first since 2017.

The foundation to the victory was built on Saturday as Uganda produced arguably their biggest sevens victory with a 71-00 win over Senegal on day one on Saturday morning.

Then Burundi was also thumped 71-00, Tunisia was next to fall 29-00 before Zambia bleached Uganda’s defence for the first time in a 40-7 defeat.

The downpour on Sunday morning did not affect their run, as West Africans Burkina Faso were defeated 50-00 setting up a semi-final meeting with rivals Kenya, who laboured but still fell 22-12.

Ian Munyani touched down to give the Cranes a bright start to the final. Aaron Ofoyrwoth split the posts after, with captain Micheal Wokorach and Thomas Kasiga also getting in on the act.

Phillip Wokorach provided the icing on the cake by converting all but one for yet again another final victory over the Southern Africans, the first coming in 2017 at Legends Rugby Club.

Uganda qualified for a second successive Rugby World Cup together with Zimbabwe and Kenya who finished third in Cape Town, South Africa.

The two finalists also qualified for the July Commonwealth Games in Birmingham, England.

Methods to Create the perfect Date

College thinks Wife Have to do After a Divorce

Next Media to cover every mile after UAF partnership