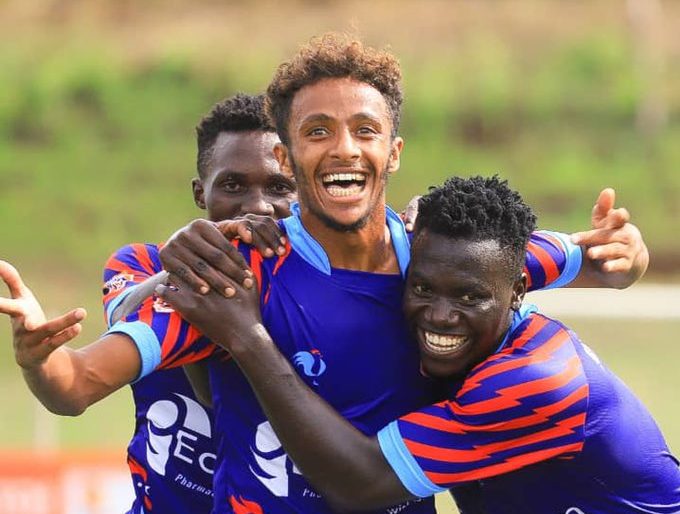 SC Villa came from behind at the FUFA Technical Centre in Njeru on Friday, to claim a hard fought 2-1 victory over Onduparaka FC to end a three-game winless run.

Onduparaka started brightly, Nathan Oloro and Emmanuel Oketcho had sent long range efforts wide before Muhamad Shaban broke the deadlock after 10 minutes with his first goal since his return to the club.

Shaban was included in the line-up despite his fitness concerns, and for the goal, he showed good predatory skills bending his run behind the last defender before shooting below Meddy Kibirige.

The Jogoo then exploded into life after 20 minutes, Travis Mutyaba and Salim Abdallah combining well to create chances for the hosts.

Villa’s pressure eventually paid off after 25 minutes, when Abdallah’s volley with outside of his right boot from 25 yards sailed over Mathias Muwanga at full stretch.

The turnaround was completed seven minutes from the half time break, Isaac Ogwang finishing off an exquisite team goal. Salim, Mutyaba’s and Goffin Oyirwoth all involved in the build up which set up the striker.

The hosts nearly had a third before the break, but Mutyaba’s deflected free kick drew a top save from Mathias Muwanga.

The Caterpillars’ evening went a notch worse with left back Rashid Okocha sent for an early shower for a foul on Mutyaba, but before he took the walk of shame, he made sure the officials got felt his fury.

Petros Koukoras’ side improved after the break and could have extended their lead late on, but Saddam Masereka over hit his pass following a counter attack while Mutyaba hesitated to shoot for goal after wriggling past a couple of Onduparaka players.

Having ended a run of three games without a win, Villa stay 13th on the table on seven points. Onduparaka meanwhile slip into eighth on eight points.

Elsewhere, KCCA extended their unbeaten start to the season with a narrow 1-0 victory over Arua Hill at the Barifa Stadium in Arua.

Davis Kasirye a first half substitute for Julius Poloto who limped off with injury scored a header in the 37th minute from Rogers Mato’s cross.

Defending champions Express were back to winning ways with a 1-0 victory over Wakiso Giants at the Betway Muteesa II Stadium. Eric Kambale scored after 35 minutes to end Wakiso’s four game winning run and lift the Red Eagles into sixth.

Nicholas Ssenkatuka scored the only goal of the game against Tooro United to collect Bright Stars’ first three points of the season and lift them into 14th above Tooro.

Police remains the only winless side in the league this season, but picked up their first point after playing to a goalless draw at the MTN Omondi Stadium in Lugogo.

Meanwhile, at Bombo, UPDF FC moved up to fifth following a 2-1 victory over Busoga United. Ivan Ahimbisibwe and Musa Mudde scored for the Army side before Douglas Muganga pulled one back for the visitors in the 87th minute.