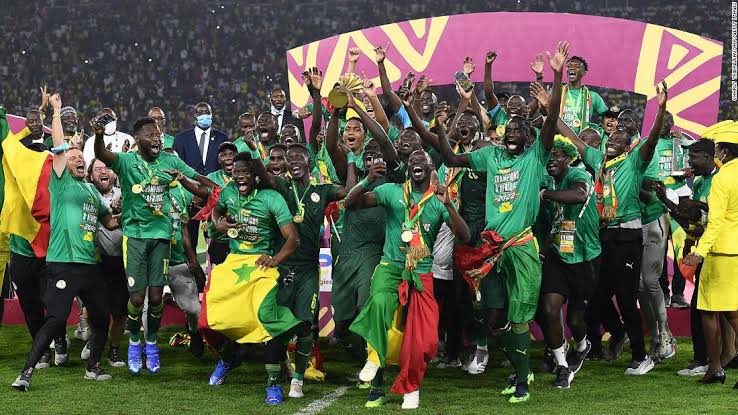 After having waited a long time in its history, Senegal also spent a lot of time on the lawn of the Olembé stadium in Yaoundé (Cameroon) to win its first continental title (4-2)

Senegal dominated without scoring a goal with a penalty missed by Sadio Mané in the 4th minute of play, Saliou Ciss having been brought down in the penalty area of ​​Egypt.

Sadio Mané shoots in force on the Egyptian goalkeeper Gabaski.

Despite this missed penalty, Senegal continues its pressure and Ismaila Sarr after getting rid of the left back, center for anyone in the axis of the goal. Three times, in the 12th, 18th and 23rd minute.

The only Egyptian opportunity is the work of Mohamed Salah who, after having a cold in the Senegalese defense, takes a shot angle. It’s deflected by Edouard Mendy for a corner.

Senegal continued to dominate but remain powerless when it comes to making the final move.

As in the first period, the Pharaohs had their chance with Marwan Mehany alone in the Senegalese penalty area, headed over the crossbar in the 73rd minute.

At 0-0 after the end of regulation time, the South African referee, Victor Gomes sent the players back to overtime.

During the first period of extra time, two Senegalese chances, Bamba Dieng put a header deflected for a corner by the Egyptian goalkeeper in the 110th minute.

On the corner, Abdou Diallo alone sees his ball from the head fly in the sky of Yaoundé.

Bamba Dieng lights up again, the Egyptian goalkeeper for a corner.

On an Egyptian collective movement, Mahmoud Aladin returns the favor, Edouard Mendy works to deflect for a corner.

After 120 minutes of play, it will be the penalty shootout, an exercise which the Pharaohs succeeded twice against Côte d’Ivoire (eighth final) and Cameroon (semi-final) were won by the Pharaohs.

Finally, it is Senegal who wins 4-2, Bouna Sarr being the only one to miss his exercise with the Lions. Sadio Mané, who missed his penalty for a corner, is one of those who scored. ?

On the side of the Pharaohs Mohamed Abdel Meneam and Mohanad Ahmed Abdelmoneim missed theirs.