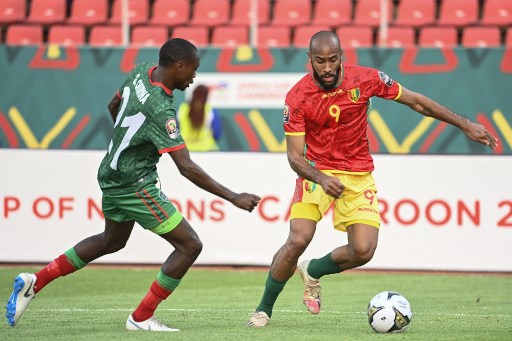 Guinea's forward Jose Kante (R) fights for the ball with Malawi's defender Gomezgani Chirwa (L) during the Group B Africa Cup of Nations (CAN) 2021 football match between Guinea and Malawi at Stade de Kouekong in Bafoussam on January 10, 2022. (Photo by Pius Utomi EKPEI / AFP)

Left wingback Issiaga Sylla scored the only goal to help Guinea to a 1-0 victory over Malawi in Group B of the TotalEnergies Africa Cup of Nations Cameroon 2021.

The Syli National had to dig deep against the brilliant Flames who were competitive through the contest at the Stade de Kouekong in Baffousam.

The FC Universitatea Craiova defender finished off a sweeping Syli National move on 36 minutes to break the deadlock.

Sylla tapped in José Kante’s cut past the helpless Ernest Kakhobwe to send the traveling supporters into wild celebrations.

The defeat will be a bitter pill to swallow for the Flames who gave their all against Kaba Diawara’s side who needed goalkeeper Aly Keita secure the points.

The Belgium based goalkeeper produced some of the best saves so far in the 33rd edition of the TotalEnergies Africa Cup of Nations.

Following a poor clearance Keita pulled a good save to deny Yamikani Chester from giving Malawi the lead on 16 minutes.

Captain Naby Keita floated in a clever ball behind the Flames defense towards José Kante who neatly found Sylla to finish off a sweeping Syli National move and secure the victory.

The two sides cancelled each other in the second period with Aly Keita and Ernest Kakhobwe producing brilliant saves at either end.

Guinea move joint top with Senegal who needed a last gasp Sadio Mané winner from the spot to beat Zimbabwe in Group B.

Victoria fired up ahead of Kumi visit