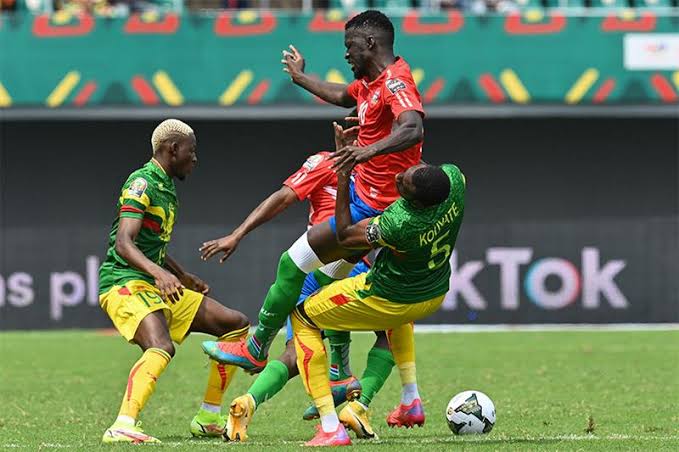 Musa Barrow scored a late penalty to give The Gambia a deserved 1-1 draw against Mali in Group F of the TotalEnergies Africa Cup of Nations, Cameroon 2021.

The Bologna striker kept his cool to calmly tuck away from 12 yards sending the keeper the wrong way to cancel Ibrahima Kone’s earlier penalty for Mali. Substitute Ebrima Colley won the penalty when his pass was handled in the area.

The Scorpions twice hit the Mali post from set piece through Ablie Jallow and Musa Barrow while goalkeeper Modou Jobe pulled a great save to deny Mali’s Adama Traore.

Kone gave the Eagles the lead from a penalty 15 minutes from time after Ebou Adams was adjudged to have fouled a Malian attacker.

The towering striker slotted in his second goal of the tournament to give Mali the lead having seen most of the ball against the disciplined Scorpions.

The Eagles started brightly at the Limbé Omnisports Stadium playing through the wide areas profiting from Moussa Djenepo and Adama Traore’s speed.

Adama Traore found space on the right channel before crossing deep into the Scorpions area but Djenepo failed to make contact.

Yves Bissouma, Massadio Haidara and Amadou Haidara all saw their efforts go wide of the Gambian goal who had Modou Jobe in great form.

Barrow hammered his long-range free kick into the frame of the Eagles goal before Ablie Jallow also fired against the post in the first half.

The two sides canceled each other and at the end they settled for a point each. Both Mali and The Gambia are on four points with a game to spare.

Micho dares trio to prove themselves for Cranes