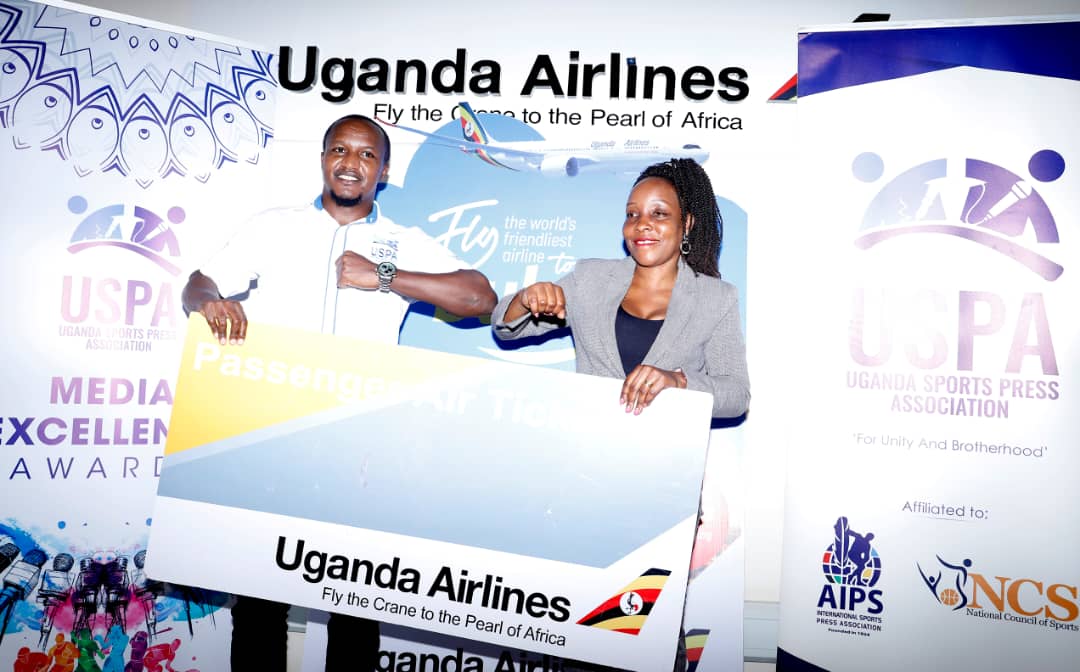 The Uganda Sports Press Association (USPA) has announced a partnership with Uganda Airlines and Pride Inn Flamingo – Kenya as partners for the USPA Media Excellence Awards 2021.

Meanwhile, Pride Inn Flamingo will offer a two-nights’ stay at their luxurious hotel in Mombasa with the prize expected to be given to the recipient of The Andrew Patrick Luwandaga Lifetime in Service Award.

The award is a recognition for a sports journalist who has demonstrated passion and excellence as well as contributed enormously to the field of sport journalism throughout their career.

Uganda Airlines’ Ag. Sales & Marketing Manager Doreen Nambatya while speaking at the unveiling of the package said; “It is a great opportunity for us as an airline to be involved with USPA.”

“We have opened our spaces to sports by flying Ugandan teams to the various destinations across the continent. I am proud that we are now engaging sports journalists.”

“We look forward a many more initiatives,” she added.

PrideInn Hotels and Resorts Sales and Marketing Director Farzana Zahir added that sports tourism in both Kenya and Uganda has really picked up and this initiative is the first of many to come.

The USPA Media Excellence Awards are a great opportunity for sports journalists be acknowledged for the exceptional effort in delivering sports information.

The awards will be held on Wednesday 15th December, 2021 at Imperial Royale Hotel, Kampala.

Eight winners from eight categories will receive a custom designed plaque and a cash prize of Uganda UGX One million (Shs.1.000.000).

The Airlines’ current network includes schedule flights to 10 destinations in seven countries including Nairobi and Mombasa in Kenya; Dar es Salaam, Zanzibar and Kilimanjaro in Tanzania, Kinshasa in DR Congo, Bujumbura in Burundi, Juba in South Sudan, Mogadishu in Somalia, and Johannesburg in South Africa.

With the recent addition of the A330-800neo, Uganda Airlines will soon commence intercontinental operations to Europe, Asia and the Middle East, with schedule flights to London, Guangzhou and Mumbai.

Set on beachfront gardens along the Indian Ocean, this laid-back resort is a 10-minute walk from Ngomongo Villages, a cultural attraction with replica tribal villages, and nine km from the coral reefs at Mombasa Marine National Park and Reserve.

The Qualities of a Great Wife