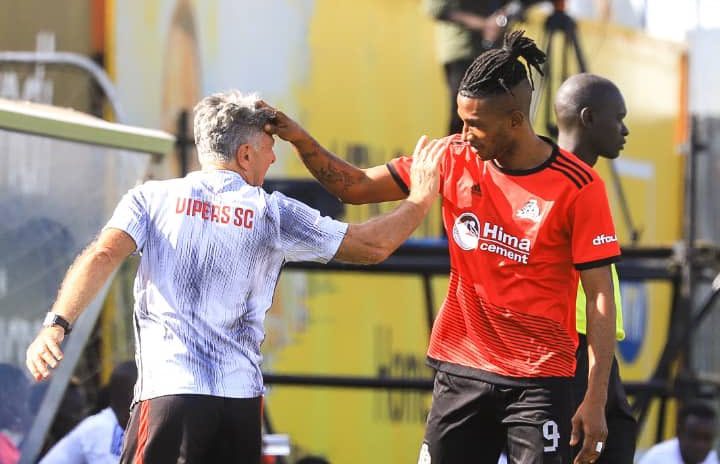 Manzoki was voted winner ahead of Police FC forward Juma Balinya, and BUL Bidco FC striker Ibrahim Nsimbe becoming the first foreign player to get his hands on the award.

Robertinho was nominated alongside Express FC coach Wasswa Bbosa and BUL coach Alex Isabirye but emerged winner after an excellent run in December that saw the Venoms briefly take the top spot at the end of 2021.

Robertinho was named Vipers coach in August, and after missing out on the award in October and November, he got his hands on his first coach of the month award.

“This is a nice moment for me, the first time I am receiving this after my time in Uganda. I want to thank my players. I will continue talking about my players because I appreciate their efforts.”

They make it easy for me. I appreciate every one of the players for their effort, discipline, and commitment. I have enjoyed working with them, and I want us to win as much as we can,” Robertinho said.

“I am not surprised by Cesar (Manzoki) winning this award because I witness the amount of work he puts in, and it is not only him but everyone in the group, congratulations to him,” he added.

Vipers won four and drew one of their five games in December 2021, scoring 15 times.

The draw came against KCCA FC at the start of the month before they went on a run collecting four consecutive victories against Busoga United, Tooro United, Bright Stars and UPDF FC.

In these games, Manzoki excelled, scoring five times during that run including a brace in the 7-2 thrashing of UPDF to lead the way in the goalscoring charts.

Manzoki has scored eight goals this season – level with closest challenger Musa Esenu and one more than his teammate Yunus Ssentamu – and he hopes to keep the run going and finish as top scorer at the end of the season.

“This is an incredible achievement for me and great motivation. My goal going into the new season was to finish as the top scorer, and this award means that I am still on the right track,” Manzoki said.

“I want to thank my teammates and the coaches for the support. Honestly, everyone at the club has helped me settle into life in Uganda since I moved here,” he added.

The Venoms have been in top form this season. They now sit two points behind title rivals KCCA.

“The status of the match overshadowed the results,” Ibrahim Dafala on the loss to Ghana in final of the 1962 inaugural independence tournament